This post, part two of two, explains some customizations I included in a basic form for creating and editing groups on my team’s app, Jane’s Lunch. In my previous post, part one, I explained how I installed a timepicker for the groups form. In this post, I explain how I created a custom form helper to normalize the states input for user addresses.

Jane’s Lunch is built on the Ordr.In API, which requires the two-letter, state abbreviation for delivery addresses. To ensure that the data we received from the group form would be clean and play well with the Ordr.In API, I used a custom form helper that would normalize the states input for group addresses.

I put the following code in the Group helper file:

Then in the view for the group form, I added this form helper to call the us_states helper:

On the frontend, the states are spelled out in the input dropdown: 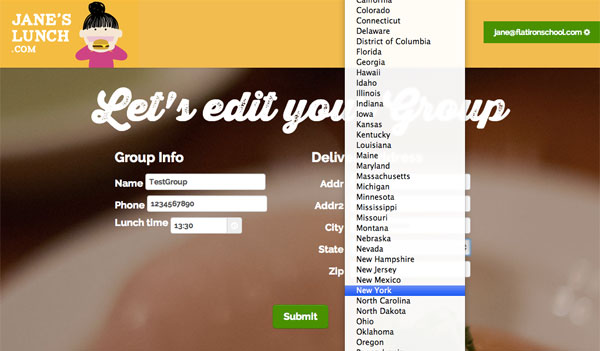 In the database, the states data is saved in the format that the Ordr.in API likes: